We have some hot Destiny news to bring you now, as we know that many of you are currently searching for the Destiny Husk of the Pit location. This weapon is rare and is one of the crucial components needed on how to get the Necrochasm in Destiny – arguably the rarest weapon in the game now.

The appears to be some bizarre circumstances on how to actually get the weapon at the moment. YouTuber Jorge Aviles has been credited with being the first user to successfully obtain the Husk of the Pit in Destiny and upload proof of it with a video which we’ve included below. 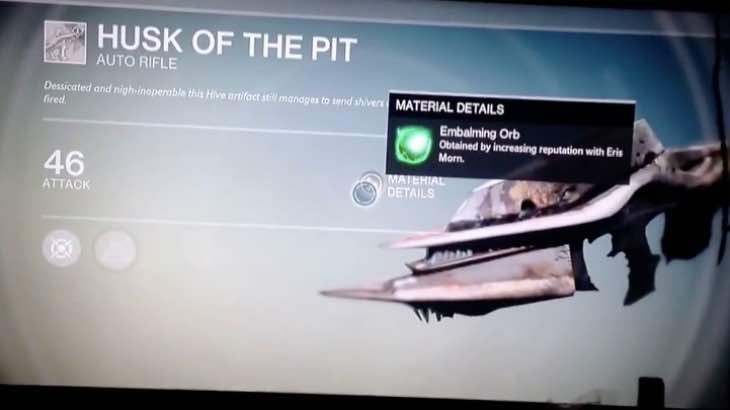 In this particular instance, the player found the Husk of the Pit in the Cosmodrome The Divide area and now faces the decision on whether to upgrade to the full version of Destiny to have the first Husk of the Pit drop before anyone else.

The screenshot which we have included above also confirms what we told you in our initial details on the Necrochasm, where the Husk of the Pit upgrade material is an Embalming Orb – purchased from new vendor Eris Morn.

Watch the video to see all the evidence and let us know what you think about this. If you are wondering how to get the Husk of the Pit in Destiny and still haven’t found it – this could be the reason why.