Earlier today we highlighted the PlayStation Network went down on May 16, or yesterday for those in the United States. The problems were due to an apparent attack by Lizard Squad, which they confirmed on their new Twitter page, but it now seems the issues haven’t completely ended.

While the PSN status is totally green with no problems being reported today, users trying to play Destiny and Grand Theft Auto V on May 16 are reporting server problems. It’s not clear if servers keep going down, or if these issues are related to local routers needing a restart after the Lizard Squad attack.

Fallout after PSN servers went down – one Twitter user said this moments ago, “How’s it that I have service down the street, but not at my house? GTA GET IT TOGETHER”. Another added, “Rockstar Support I have the same problem going into GTA online as I had that day it was down, what can I do to go online?”. These issues reveal that thousands cannot get online after the PSN outage, but it also reveals many more can play and this could be due to gamers needing to totally power down and restart routers/consoles.

Are you able to play Destiny, GTA V, and other games through PSN today? Or, are you having sign-in or server connecting problems? It will be interesting to see if all those being impacted by the issues right now found all worked after resetting. 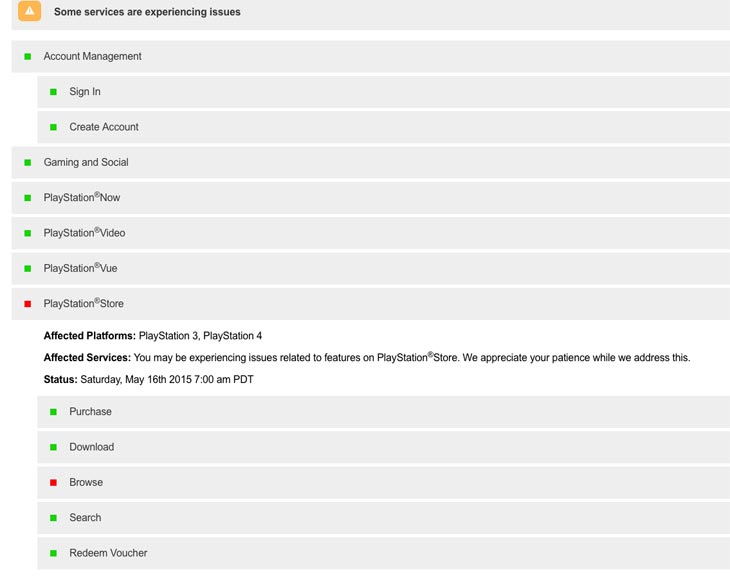 Update: The official PSN status page just updated with some problems. The PlayStation Store is down on Saturday, May 16th 2015 and they ask for “patience” while the issues are fixed.