We have a reminder to all guardians that the Destiny December 2015 update is just around the corner. For those that are not aware, Bungie are now putting the final touches on Destiny 2.1.0 and it is being targeted for release in ‘early December’.

That’s the only timeline that Bungie has given to the update, but we should see a fresh update sometime this week on the exact rollout given that the Black Friday and Cyber Monday Thanksgiving festivities are now over for another year.

We can see that many fans are already predicting that the Destiny December 2015 update release time will coincide with Sony’s next major event – the PlayStation Experience 2015 expo which takes place between December 5-6. 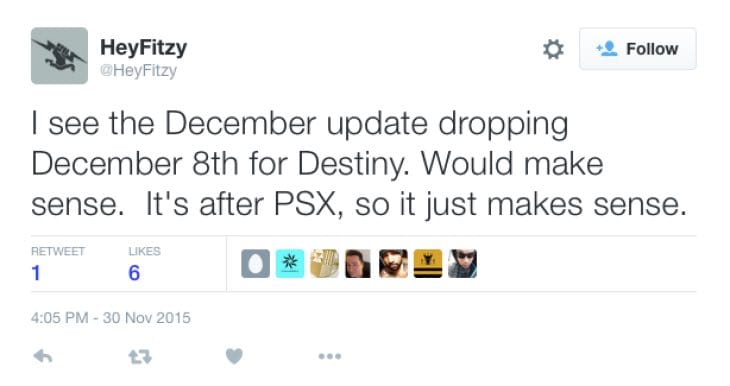 That is this weekend and some fans believe that the December update for Destiny will follow directly after that on Tuesday December 8 – since Tuesday is usually the day in which Bungie rollout new content for Destiny each month.

Hopefully Bungie will confirm the date for us this week and when the update does arrive, remember that it will be coming with the new King’s Fall Challenge Mode which is another step up from Hard mode which will offer even greater rewards.

There is also going to be another big weapon balance update so it is definitely a patch which can be classed as a ‘major’ one.

What are your expectations of the next update – what do you want to see before anything else?