We have some more information now for those that are looking for Destiny The Dark Below details on Xbox One and PS4. We told you recently that Destiny’s first DLC expansion was coming in December and now Bungie has released an FAQ on what exactly to expect from the content – both for paying customers and non-paying customers.

One of the biggest additions in the expansion, is the fact that Bungie will be increasing the light level cap to 32. This has become a big talking point with the community, but hopefully the rest of the other content will balance things out.

Bungie has compiled a quick ‘no nonsense’ list for those that just want to see a breakdown of what will be included with the expansion compared to the current build – take a look below to see the full list. 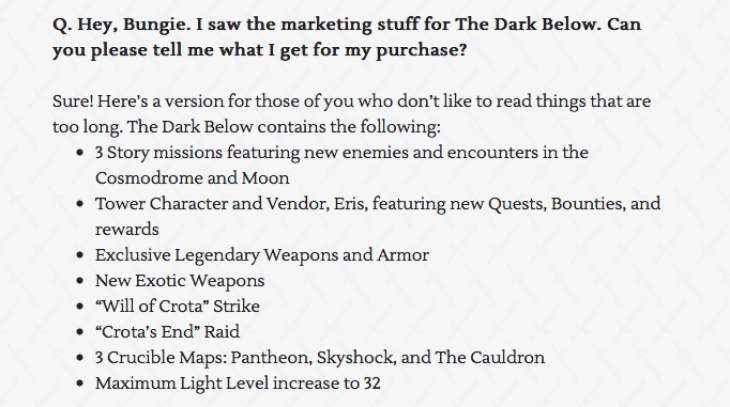 As you can see, aside from the new exotic Destiny weapons which we’ve already told you about, The Dark Below will also offer 3 Story missions featuring new enemies and encounters in the Cosmodrome and Moon.

On top of this there’s also going to be a new Tower Character and Vendor, Eris, featuring new Quests, Bounties, and rewards – likely to be the most exciting feature of the entire expansion in our opinion.

Three new Crucible Maps round out what looks to be a massive expansion and should be an explanation as to why you’ll need to pay $20 to play it on December 9. Let us know your thoughts on the upcoming content and whether you are happy to pay that kind of money or if you are unhappy.