We are expecting Destiny House of Wolves as the next expansion for the game after Dark Below. However, something massive may be on the horizon after that as Bungie’s Destiny DLC 2015 roadmap may have leaked in spectacular fashion – offering a glimpse at the main content on the way to the game throughout the year.

So far, Bungie has only announced that House of Wolves will be released in early 2015 but they haven’t offered a date yet. However, an alleged image leak threatens to spill all of Bungie’s close guarded secrets with not only an exact Destiny House of Wolves DLC release date, but much more too.

In particular, the unveiling of what could turn out to be the first ‘true’ expansion for the game with the Destiny Comet: Plague of Darkness DLC expansion. 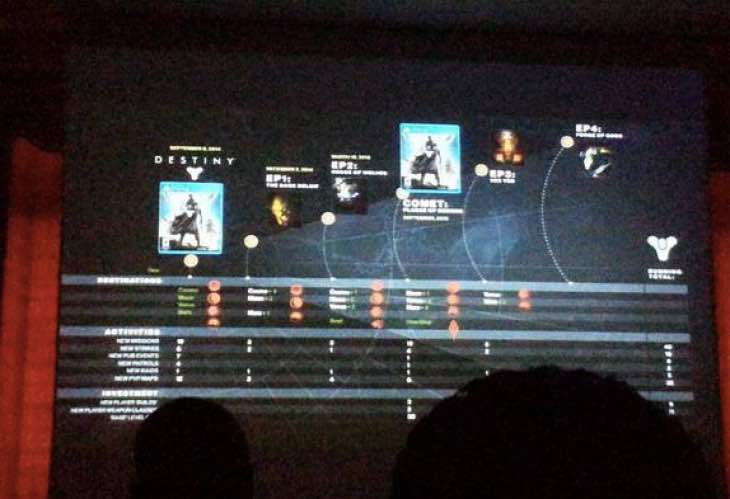 You can see this included on the image leak above, which as reportedly been captured at a private Bungie meeting – very naughty from an employee if confirmed to be true.

It lists the Comet Plague of Darkness content with a September 2015 release date and will reportedly be the largest drop of new content seen for the game yet. This includes Destiny Comet Plague of Darkness features comprising of four locations and new activities with 12 story-based content, 1 new Raid, four new Strikes, 6 PVP maps, new subclasses and wait for it – two brand new weapon types.

It sounds amazing if true and we are waiting for Bungie to confirm this. Also contained on the leak is further ‘smaller’ expansions akin to that of the Dark Below, titled Vex and Forge of Gods – both of which could actually be DLC drops that will keep Destiny players occupied until 2016.

What we don’t know yet is whether this Comet Plague of Darkness DLC will include timed PlayStation exclusive content following on from Dark Below and the soon to be released House of Wolves content.

It certainly looks like this is the mother of all Destiny leaks right now, but we await Bungie’s announcement. Take a look at the blurry image and let us know your thoughts on the new large expansion for the game.

Xbox players, will you be sad if Sony manages to secure even more DLC for PS4 and PS3 players with Comet Plague of Darkness?