We have already seen Destiny’s The Dark Below expansion offer up some brand new gear such as the Ruin Wing gauntlets, but now we have another set of gauntlets to tell you about.

Xur’s new items in Destiny this week includes the Claws of Ahamkara Exotic Warlock gauntlets and they are available to buy right now for 13 strange coins. That is quite a high price considering that these are also a rare drop, so is it really worth dropping the strange coins on these?

To help you with that answer, we have picked out the Destiny Claws of Ahamkara stats for you, while we can also offer you a video review below from a player who has already obtained them – prior to Xur. 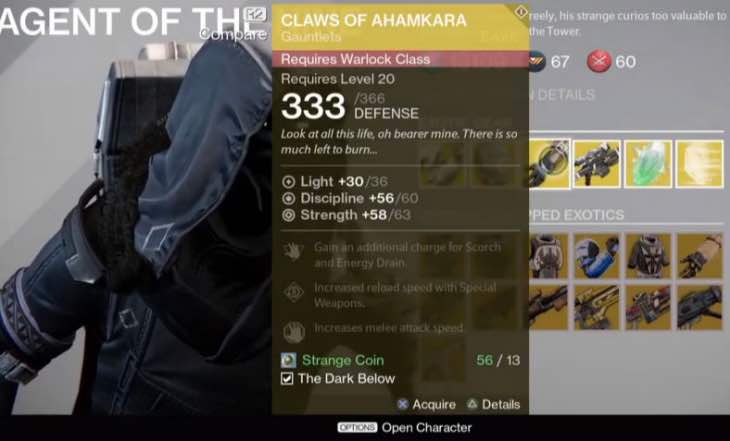 You may not realize, but the Destiny Nightfall Strike rewards for Dark Below players can actually turn up these Claws of Ahamkara if you are lucky enough. As a result, you may want to save those 13 strange coins for something more luxurious from Xur later down the line – like the Icebreaker or Gjallarhorn.

In the meantime though, the Ahamkara’s stats are still pretty decent. The Claws of Ahamkara have a unique ability called The Whispers, which allows you to gain an additional charge for Scorch and Energy Drain.

It also offers a base Defense stat of 333, while it comes with the ability to increase reload speed with special weapons, plus increase melee attack speed too as the icing on the cake.

Again though, are they worth spending 13 coins on? Check out the review below and let us know if you purchased these Warlock gauntlets from Xur today. Let’s hope none of you regret that purchase later on.