Now that the main information regarding the Destiny House of Wolves Raid has been disclosed via a leak, we can now give you some early details on the Destiny The Arena Raid, including what looks to be one of the rare rewards that will be available.

Bungie hasn’t announced the information officialy yet, but we have a feeling that they may have to since everyone is now reading about the leak online.

Assuming the details are correct, the House of Wolves Raid will be called The Arena and it will be going live on March 10. 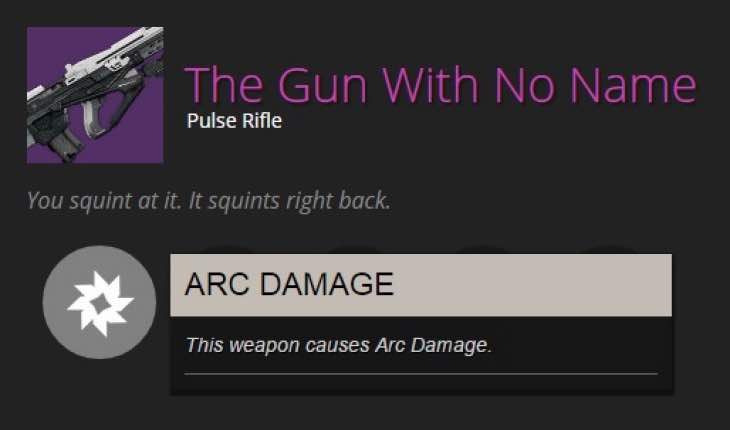 The Arena Raid location is thought to be on The Reef and one big prize on offer could be called ‘The Gun with no Name’ Legendary Pulse rifle – which deals out Arc Damage.

We can tell you that the official description of this weapon reads: “You squint at it. It squints right back”. While the guys over at DestinyTracker have already detailed the entire The Gun with no Name stats which you can check out for a great heads-up.

Check out the stats and let us know what you think about this weapon – how do you think it will be unlocked in The Arena? Remember it’s just one of several new weapons that is on the way with House of Wolves – included with the Season Pass if you have it.

Does this weapon interest you on first glance?