We have some exciting Destiny news for PS4 and PS3 gamers now, but not particularly good news for those playing on Xbox 360 or Xbox One. Sony has just announced that the upcoming Destiny Dark Below DLC is going to have exclusive content as well.

As most of you know Destiny already contains the timed-exclusive Dust Palace Strike Co-Op mission that isn’t on Xbox at the moment. Now we know that there’s going to be even more exclusive content for PlayStation this December.

On the PlayStation Blog, Sony has just unleashed the Destiny 4th Horseman Exotic Shotgun. This is going to be one of the brand new Destiny Dark Below Exotics and a weapon that isn’t going to be available on Xbox until Fall 2015 at the very earliest. 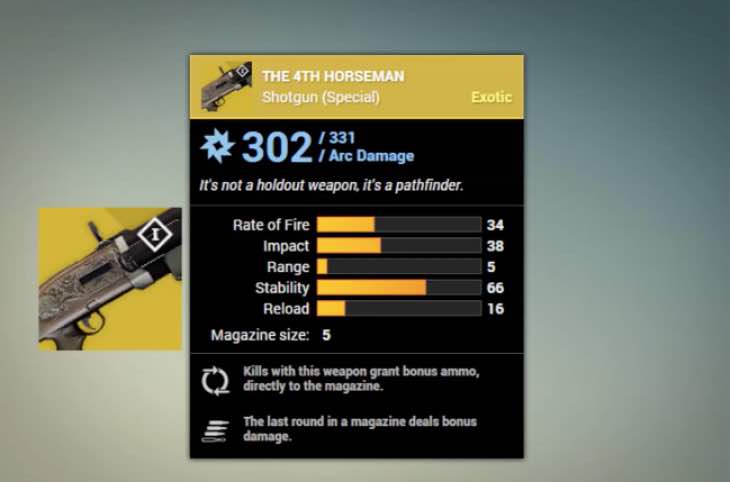 We can now show you for the first time, the Destiny 4th Horseman weapon stats, plus take a look at the two main features of this new weapon. As you can see, this shotgun is going to deal Arc Damage and has strength in stability and Impact.

The key perks are Final Round, allowing the last magazine in the round to deal more damage, plus Return to Sender which can score you some bonus ammo upon use – this is going to be the highlight in our opinion.

This weapon looks amazing, to the point where we’ve already seen talk among Destiny fans on social media that the 4th Horseman looks ‘overpowered’.

We can’t wait to use it though and it will go live when Dark Below launches on December 9. If you are an Xbox player reading this, let us know how you feel seeing another Exotic weapon in Destiny slip away from you – are you slightly jealous by this treatment?