Bungie has given out a preview of what to expect with the next major Destiny patch that is already in development. Specifically, we can now tell you which weapons are next to be receiving a nerf and also which ones will be boosted to in order to balance out competitive play moving forward.

This should be the Destiny 2.1.0 update, with Bungie referencing it in their most recent Weekly update in which we have a detailed list of what weapons are next up for tuning.

If you have been using Pulse Rifles primarily, you may be sad to find out that they are the main target with a nerf next update.

Shotguns are also receiving a slight nerf in the next Destiny update, with Bungie tweaking the range in which shotguns can be effective – in other words they are too good at the moment from distance. 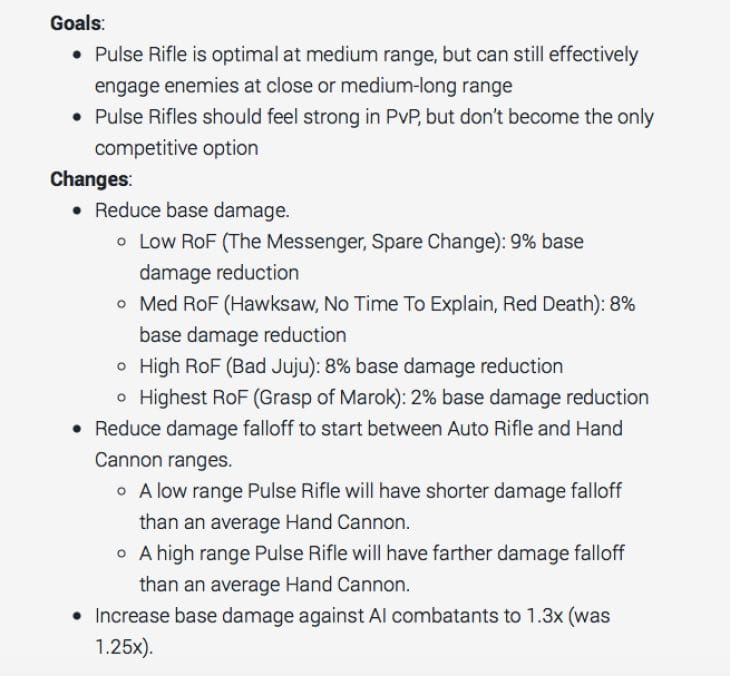 To combat this, Bungie will increase the recoil on the stability range across all shotguns whilst at the same time adding 2 frames of delay when firing out of sprint.

The good news is that Auto Rifles will be receiving a buff with Destiny patch 2.10. Specifically, the weapons Zhalo Superccell and Paleocontact JPK-43 will have a 7% base damage increase, while the Suros Regime and An Answering Chord will have a 3% damage increase.

Necrochasm fans will be very pleased to hear that following the update, this much criticised weapon will have a 4% base damage increase.

These are just some of the key areas being highlighted, but you should head over to Bungie for the initial Destiny 2.10 update notes preview for a better idea.

The update should be arriving soon given that Bungie has shared so much data already, so let us know your thoughts on the tweaks and if you feel they are justified, or unfair.

Update: We now have confirmation from Bungie in their latest Weekly Update that the Destiny 2.1.0 update release date will be going live ‘early next week’ along with the Destiny 2.1.0 patch notes – Tuesday December 8 is a safe bet.