We have been getting reports that the big Destiny 2.0.1 patch that went out on all platforms is specifically causing issues with the PS4 update.

On PS4, players have had to download the Destiny update version 1.17 and the strange thing about it is that it is a massive 18GB update.

On top of this, many players are saying that the Destiny 1.17 update on PS4 is not downloading and in some cases shows a ‘Corrupt data, can’t download’ message after the Destiny update file ‘preparing to download’ screen. 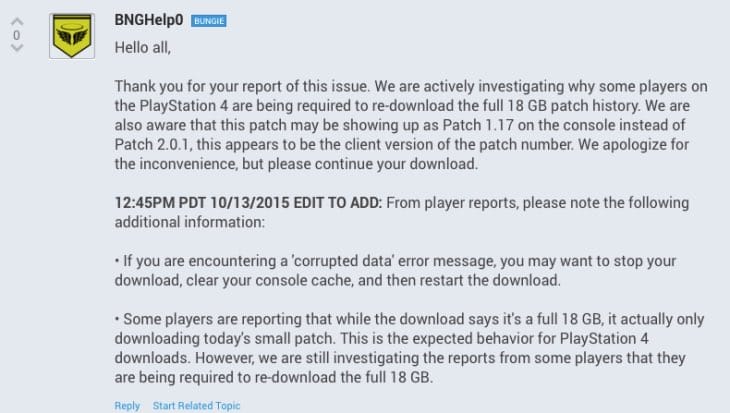 In reality, this update is only supposed to be 500MB in size, not 18GB. The good news is that Bungie is already on the case and are investigating why PS4 users have had to install the full 18GB patch again.

As you can see from the statement we found above, Bungie still advises users to install this update but if it still doesn’t work after that – to cancel the download, clear the PS4 cache and try again.

This is obviously a nightmare for those on slow internet connections, so it is really not ideal when most just want to enter the new Iron Banner and have some fun.

Did you have problems with the Destiny 18GB update file not downloading after the patch went live? Give us your current status below.