We have already seen how the demand for Apple’s tablet has caused problems with the supply of touchscreen panels, and the iPad 2 release will give competitors a run for their money in 2011, Apple will want to keep the lead with the 2nd generation iPad.

While marketing is always important for any new product released, the hardware will be the most important part of success for tablet’s this year, especially when it comes to the size. Will you go for a 7-inch or 10-inch tablet; we have already made our view clear that 7-inch devices seem too close to cell phones. Unless we see phones shrink a lot in size, 10-inch devices will be the way to go.

Pad Gadget tracked down a video from M.I.C. Gadget, which shows a good-looking leather case, and the interesting part comes from claims that it held the iPad 2. We have seen other cases for the iPad 2nd generation before, but none said they actually had the hardware inside them at any time. This is the claim being made in an article that can be read here.

You can see a hands-on video with the so-called leather iPad 2 case below, which shows a close up with the product. The Apple iPad rumors we’ve heard already are confirmed by the case, we only hope its not playing on them rumors that include room for a camera and larger speaker. 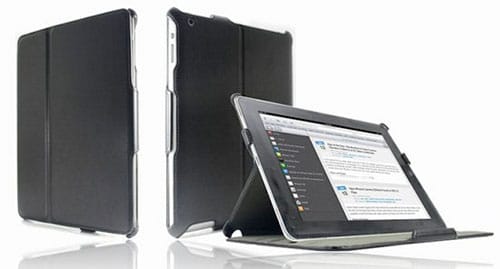 Check out the video and let us know if anything is missing from this case. The design will certainly be final now that a release has to be days away, but are we looking at an official iPad 2 case? You can see some really nice views of the apparent iPad 2 case on micgadget.com, and they have another video for you to see.