Denon are better known for their quality AV receivers and Hi-Fi separate components, which are often highly regarded for sound quality among audiophiles and consumers alike. Now we can tell you that Denon reveal the DNP-720AE AirPlay enabled audio player.

The Japanese company has revealed the new network audio player that according to TechRadar is aimed to mix modern day music use but with Hi-Fi sound quality. Owners of the new unit will be able to stream music from networked connected PCs or NAS drive via a Wi-Fi or Ethernet connection. There will also be able to access Last.FM and Napster.

Other supported platforms include MP3, WMA, WAV, AAC, FLAC and FLAC 96/24. Denon’s long history with sound quality has been utilized with the units 24 bit/192Khz DACs and ‘simple and straight’ circuit design.

The Denon will have to be hooked up to a stereo amplifier via the phono outputs on the back to hear the quality sound, so you will need a spare set on your amp. Like a lot of audio equipment now the DNP-720AE is AirPlay capable so users can stream their music direct from an iPhone, iPad, iPod Touch, and from the iTunes library on your PC or Mac.

It is also Windows 7 certified for ‘Play To’ on Windows Media Player 12 and higher, and it can use the company’s remote iOS application with an Android version rumored to be on route. On the front is an USB port for content stored on portable storage devices, and you also get an AM/FM tuner built-in.

The Denon unit will be available in black and silver finishes and will be in stores at the end of the month for £430/$500. Will you be interested in the Denon DNP-720AE? 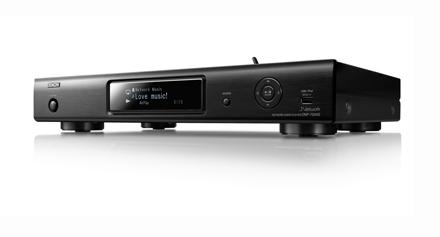