Do you own an Apple iPhone, iPod Touch or iPad? Are you a fan of run-n-jump games? If you answered both those questions with a yes, then you’ll most likely love dreamfab’s upcoming Demolition Dash game, which is due to hit the Apple App Store on May 26th.

As Daniel over on the intomobile.com website recently reported, Demolition Dash is a side-scrolling run-n-jump game that sees players taking control of a monster called Zilla, who has decided to travel around the world and cause as much damage as it possibly can.

The game will see Zilla visiting some of the world’s most iconic cities such as Moscow, Paris and Tokyo. As Zilla runs through every city, it will run up a dollar amount that equals to how much damage it has caused. Each city features a number of objects to destroy. 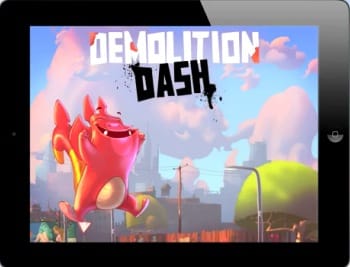 These include trees, abandoned vehicles and balloons. Zilla will also run into a number of enemies during its journey, which it will either have to avoid or let out a roar in order to knock them out of the way. The aim is to make it to the end of the level without losing all Zilla’s health.

However, the Demolition Dash game does up the challenge a little, as each level will also have a challenge that enables Zilla to earn serious cash if the challenge is completed. The challenges range from destroying billboards, to collecting balloons and knocking down garbage cans.