As you may recall, Dell’s announcement of a Venue powered by Android was made official last month. There were already talks of it coming soon back in October last year. No talks of a release across the pond were ever mentioned though. That all changed yesterday when Dell said they were offering the Android 2.2 smartphone, unlocked on the two networks AT&T and T-Mobile, confirming that the Venue would indeed be available in the U.S.

With it also being contract-free, you can expect to be paying quite a lot. In fact Dell have priced the device at $499.99. That price may be hard to take for some people but when you look at what you’ll be getting compared with other smartphone devices, it doesn’t seem all that bad. Read what Phonedog made of the price here.

As we mentioned earlier, it comes with Android 2.2. It will also feature a 1GHz core, flash storage of 1GB, microSD memory card, 512MB RAM and an 8mp camera. You can find out what else it comes with on Dell’s official website. 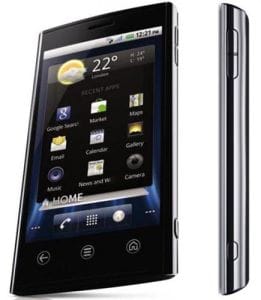 Orders are expected to be shipping from February 18th but if the past has taught us anything it’s that these dates can never be certain.

What do you all think of the Venue? Does it seem like a worthwhile handset?