Dell has been revealing plans of their 2011 tablet PC lineup, but one device that we were not sure of was the Dell Rosemount Enterprise Tablet, which Android Central leaked a couple of days back. However, we now have information that this device will happen, but it is that removable battery that has us interested the most. So what else is known about this upcoming Windows 7 device?

Firstly this will be a 10-inch tablet and is expected to form part of the Dell Latitude range. Sean Hollister from Engadget was tipped off by a source saying that the Dell Rosemount will be geared towards the business user — so aims to be going head-to-head with RIM’s BlackBerry PlayBook. Seems like the latter will have more tablets to contend with than first thought.

With any business user having removable components such as the battery is important, as they will be able to take a spare battery with them when travelling. How bad would it be if you are stuck on a train working and your tablet dies on you — well you will not have to worry? 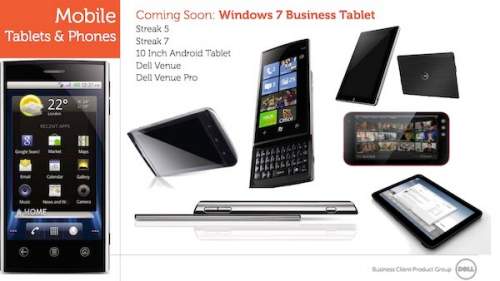 Other features that will appeal to the enterprise user are remote wipe, software encryption, dual-digitizer and finally a stylus. We told you that the HTC Flyer could be a game changer; this is now the second tablet that we know of that will come with a stylus.

Other details are a bit thin on the ground, but it looks as though it will use Intel’s Oak Trail Atom CPU. Do you think that the Dell Rosemount Tablet will be the first of many with a removable battery?