Dell recently held an event, which to many seemed like a bit of a bore, but thankfully a little gem was announced. We give you the Dell Latitude E6220, and as it has a slim and light form-factor it will be up against the 11-inch MacBook Air. The 12-inch Dell laptop looks very nice from what we can see, but we have come to expect that from the computer maker.

Engadget was able to spend a little time with said laptop and thought it funny to place their smaller MacBook Air on top, just to give us some perspective of the difference in size. However, Myriam Joire did notice that there could be an issue with the Intel Core i3 processor, as she believes that “Performance seemed adequate.” One would have assumed that Dell would have given the laptop more of a speed bump.

The main features include that 2.1GHz processor, 4GB of RAM and a choice of hard drives, not certain if it will be an SSD as standard though. You would assume in this day and age that most small laptops would come with this preferred storage method. This will not only help with speed, but also with noise levels and battery life as well. 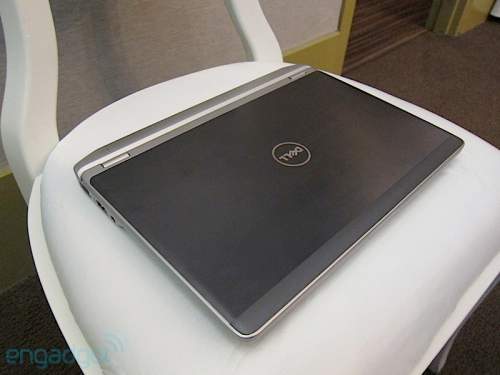 Windows 7 is the OS of choice, cannot help but wonder how a many such as his would run with Mac OS X instead? We know that it has been asked many times before, but we can all dream right? There are no details on price or release date, but we will keep you informed. keep up-to-date by visiting the official Dell website.

How do you think the Dell Latitude E6220 compares to the 11-inch MacBook Air?