If you’ve been paying attention, and hanging on to every word that Facebook CEO Mark Zuckerberg has been saying regarding the native Facebook app for iPad, you can forget all that now. As it turns out, that very code has been discovered while it sits secretly in the iPhone’s Facebook DNA strands.

A little over 9 months ago, back in November 2010 to be exact, Mark Zuckerberg attended Facebook’s mobile event, and while answering questions in the Q&A, he referred to a question regarding a possible dedicated application for Facebook on the iPad.

“The iPad’s not mobile… it’s a computer.” Quickly changing the way he answered his question, he did follow it up by saying “we all love Apple products,” the iPad just “isn’t mobile in the same way.”

In any which way you look at it, it seemed as though an iPad application was just not in the heads and minds of the Facebook HQ, especially Zuckerberg. But how time changes.

The iPad has rapidly become on top of the ‘Most Wanted’ gadget lists all over the world, and with this it seems as though Facebook thought it was time they catered to those people by treating them with their very own Facebook application. Could this be totally down to the competition from other tablet manufacturers? Or could it be down to the pressure from Google over the launch of Google+, who are guaranteed to have a dedicated application for just about every smartphone and tablet on the market.

Whatever the case, lets get down to the real reason we are here. Introducing the new Facebook for iPad application. 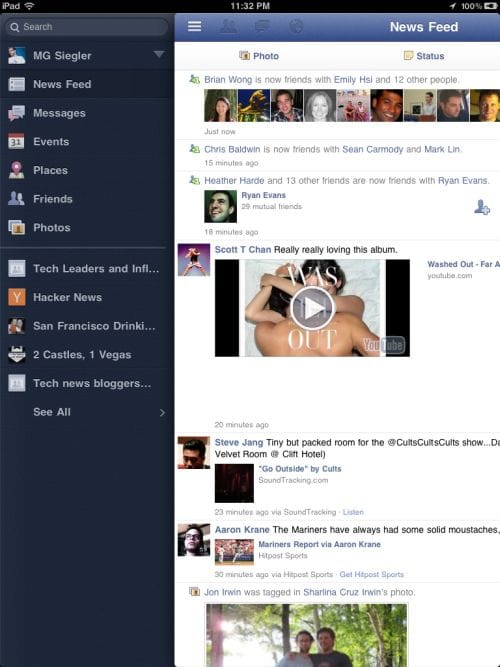 According to TechCrunch, they say that the hidden gem was found embedded within the code of the latest version of the Facebook for iPhone app, which is now at 3.4.4. The latest update was apparently a small fix that restored the ‘Send’ button, and fixed other niggling issues that has caused quite a stir over the usuability of the iPhone app. Even the creator is complaining about it.

Although getting the right code to execute the application is kind of tricky if you are not sure how, maybe this tweet from an “iOS Enthusiast” can help you in the right direction.

We at Product Reviews have not yet tested this ourselves, but the guys at TechCrunch have dug their nails in and have posted a gallery full of screenshots for you to take a gander at. As you can see, it looks rather impressive.

Have you had a play with the dedicated Facebook for iPad application yet? Do you like it? Tell us your experiences below.