We recently brought you news that Rocksteady Studios was to announce a new villain featuring in the upcoming game Batman: Arkham City. Well it appears the developers have been true to their word and during an episode on GTTV revealed that the new villain will in fact be Deadshot.

The sharp-shooting assassin is the latest from a long list of names that have been revealed by the developers so far and one of several bad guys set to face Batman in the City of Gotham. It will be the first time that Deadshot has appeared in a video game and as you can see in the trailer, Rocksteady has done what they do best and put their own perception of the character in his design.

According to the report at Attack of the Fanboy, the great marksman will not be part of the main storyline and missions, but a side mission, seemingly optional. The Dark Knight has to try to stop him from assassinating the ‘specific’ people on his hitlist, and as a result ends up on the list himself.

Due to Rocksteady’s unique take on the character, fans of the comic book version of Deadshot may not recognize him as he has undergone some wardrobe changes so as to keep in line with the main narrative of Arkham City’s story. The developers wanted to make it seem more realistic, so rather than the character just appearing randomly, there is a story to his entrance. He is forced to disguise himself as an inmate in order to get through the gates, but somehow smuggles his trademark eyepiece and wrist cannons in, which he later equips himself with and uses.

Check out the full episode from GTTV by clicking the link above for more details and a glimpse of the character. Are you pleased that the new character is Deadshot? Is there someone else you would like to see in Arkham City? 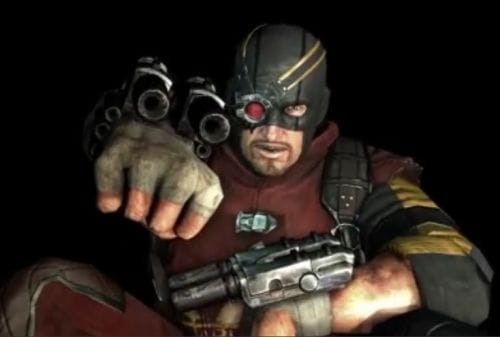