We have some good news for those of you planning to pick up the Xbox 360 version of Dead Space 2 in January, as it looks like we have a confirmed list of achievements which you’ll be able to unlock in the game.

The list comes to you courtesy of Xbox360Achievements.org, as they have managed to obtain a full list of the 50 achievements which you can get.

35 of the 50 have already been detailed, but there are also a further 15 ‘secret achievements’ which you’ll have to find and unlock yourself if you want to know what they are.

Some of the achievements include 50 points for ‘Completing the game on Zealot setting’, while more adventurous ones include things like ‘Going for Distance’ – which requires players to ”Impale an enemy and make him fly through the air for 17 meters – it must stick to the surface.” Completing that particular challenge will reward you with 20 points to your total Gamerscore. 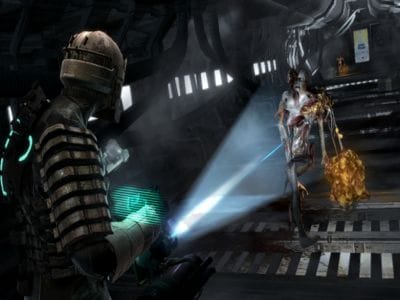 If you want to see the full list, head to the link above. What are your thoughts on the full list? Are there any which you are excited about? We have to say that ‘Taste of your own medicine’ and ‘My Boom Stick’ look particularly appealing.

In case you are interested, there were only 48 achievements to unlock in Dead Space 1, so you’ll be getting an extra 2 here for the sequel. If you manage to find every single achievement in the game, including the secret ones, you’ll earn yourself a total of 1000 points for your Gamerscore.

Dead Space 2 is due out January 25th.