If you love zombie-killing games and you own an Apple iPhone, then boy have we got some great news for you!! A brand new app by the name of Dead Rising Mobile has just arrived on the iTunes App Store, and can now be yours for £2.99 ($4.99).

As recently reported by Mic Wright over at electricpig.co.uk, the Dead Rising Mobile app puts players back in control of the main character Frank West, and the game is set in the original shopping mall that featured in the very first Dead Rising title. 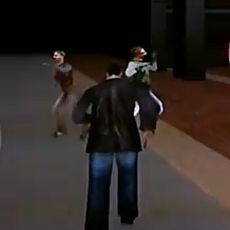 The great thing about the Dead Rising Mobile game is that it links to social networking sites such as Twitter and Facebook. If you’re killed within the game, you can post a message on either of those sites asking for your friends’ help.

If a friend then jumps into your game, you can restart it without losing any of your experience points. However, if you don’t end up being saved, your character will then turn into a zombie and even pop up in other people’s games with your name on it.

I don’t know about you, but this game sounds pretty awesome to me. You can read more of a description over at the itunes.apple.com website. Will you be downloading the Dead Rising Mobile app for your iPhone?