While Chelsea fans are patiently waiting for EA to update Pedro on FIFA 15 Ultimate Team, Man City fans are also sweating on another big name signing with the Kevin De Bruyne transfer to Manchester City.

The latest transfer news initially suggested that De bruyne was definitely on his way to Man City. However, now over the last 24 hours it appears that German champions Bayern Munich have entered the race and it could even be Bruyne’s preferred destination according to one media source.

Assuming that the player does move to Manchester though, it makes for a very exciting squad on FIFA 16 for Man City fans. 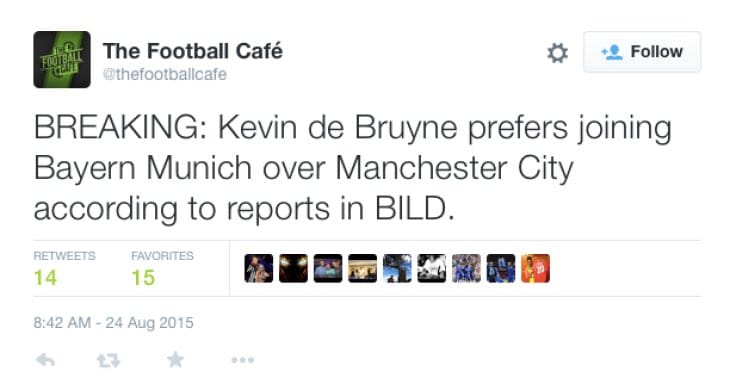 The team would then have a midfield that consists of David Silva, Raheem Sterling, Samir Nasri, De Bruyne and Yaya Toure – very frightening when you look at it on paper.

De Bruyne has had an amazing season for Wolfsburg and EA has given him an array of different Ultimate Team cards to reward him for his performances. 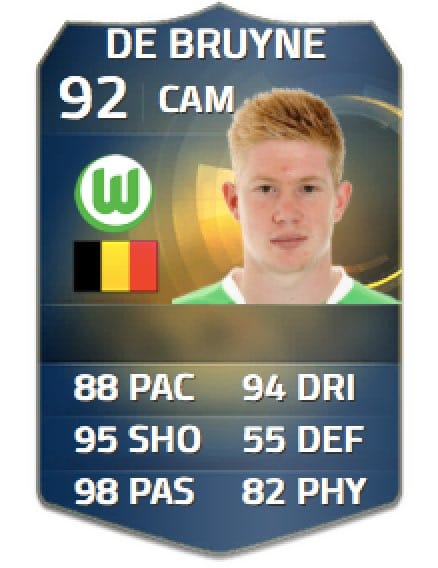 His highest rating on FIFA 15 is now a 92 for Germany’s TOTS which is incredible – especially when you consider he started FIFA 15 with an 81 default rating.

Looking ahead to the launch of FIFA 16, would you love to see De Bruyne available for selection on Manchester City’s main roster?

Let us know if you think the player will end up moving to Man City or stay in Germany to move to Bayern Munich.