One thing the PlayStation 3 owner wants from Bethesda in regard to the first Skyrim DLC is communication, and while moaning about the lack of Dawnguard on the PS3 won’t make it arrive any sooner, it is fair that these gamers should get some regular updates as to when the launch might be. Sadly the reality couldn’t be further away from this, and we’ve seen this in a recent tweet by those behind the game.

Dawnguard PS3 shrouded in secrecy – rather than delivering timely updates about the issues with getting the Skryim DLC on the final platform, we are instead seeing replies that lack details and in fact give just about nothing away. It has been two weeks since PS3 owners got confirmation that there were problems getting Dawnguard to run smoothly on their platform, and yesterday Pete Hines had been asked directly about the release date.

Hines had one gamer begging for some information, which is likely the reason he responded to the launch question in the first place, and you can see the tweet in the image below. This includes the question and reply from Hines, although other Twitter users jumped in on the conversation explaining, “Silence is bad for business“. It is fair that Bethesda has a lot of supporters that understand how time consuming fixing these bugs can be, but that line of thought is not shared by the majority of PS3 users that have been waiting too long for the Dawnguard expansion. 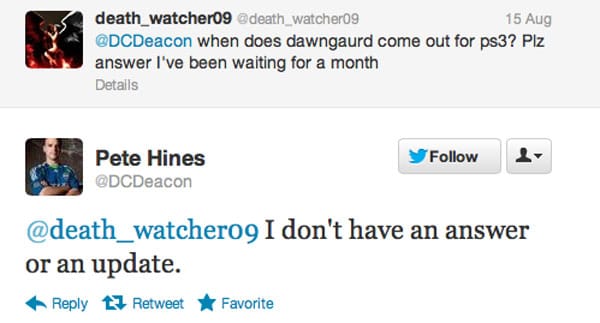 Finding a medium with the right amount of communication — it is proven that being silent can help create hype when marketing a new product, but when it comes to issues like those seen with Dawnguard for PS3 it seems that there needs to be balance with fan communication. Bethesda won’t want to make false promises and need to have a clear timeframe for fixing the issues with the PS3 first, but currently the communication is pretty much not there right now, which is really frustrating Skyrim players with a PS3.

Would you rather see Dawnguard released on the PS3 now and then these problems fixed later, and if not then do you think there should be more communication with the development? In our opinion there should be weekly updates on the development, and this is especially true considering how unfair it seems to PS3 owners with other platforms having the DLC already, which seems to be turning into a PR disaster right now.