We’ve now entered a fresh week and unfortunately, there’s still no sight of the highly anticipated Skyrim Dawnguard DLC expansion for PS3 and PC users. It’s not all doom and gloom though, as Bethesda’s Pete Hines has given a fresh update on Twitter for the masses of impatient fans.

We previously told you how some recent Tweets from Bethesda’s PR man had created a fair bit of confusion over the weekend. Many had expected Dawnguard to release at the end of last week due to Microsoft’s 30 day exclusivity already up, but it wasn’t to be.

As you can imagine, PS3 and PC gamers are sick of the wait, sick of watching numerous gameplay videos on YouTube and just want to jump straight into the expansion themselves and roam around the soul cairns on the new flaming horse Arvak. Hopefully, just hopefully, Dawnguard may be releasing this week.

Pete Hines has been doing his best to answer the inevitable barrage of abuse that he’s been getting due to the current no show on PC and PS3. Here is what he had to say on Twitter recently when replying to a fan who asked him why Dawnguard had been ‘cancelled’ on PS3 / PC, even goading him to ask if it was due to ‘low sales’ or the amount of bugs in the Xbox 360 version: 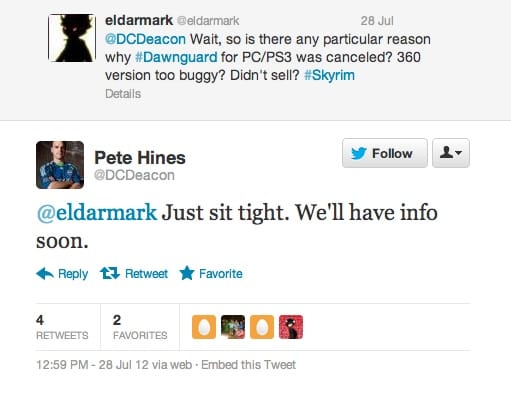 We think Pete Hines handled that reply pretty well, as he was well within his right to send a sarcastic little reply back. Hopefully his reply means that we’ll be seeing that information this week, as you can bet that most PS3 and PC users will be expecting Dawnguard to arrive this week and no later.

How are you handling the wait for Dawnguard? Are you playing a bit of MW3 or BF3 while you wait? Sending out Tweets to Pete Hines like the one above surely isn’t the best idea though.