Much has been speculated about Cydia 1.1, but we did not have anything official — until now that is. Jay Freeman, who is the lead developer behind the software for the iOS application has been going over the list of changes for this latest version. We just hope that they have given users what they have been waiting for?

According to the iPhoneDownloadBlog,some of the main features include being able to run as well as operate Activator, SimulatedKeyEvents and libstatusbar, all of which can be used while Cydia 1.1 is running. Two of what looks to be the best features, but will not be seen by the user is a speed improvement, along with less memory usage.

However, these improvements will still not allow for multitasking. The developer has said that it is still far too complicated to get this feature to work at the moment, and there are still no clues as to when it will be made a feature. We still do not know when Cydia 1.1 will be available for iOS 4.3, but we have already seen the iPad 2 running on the current version. 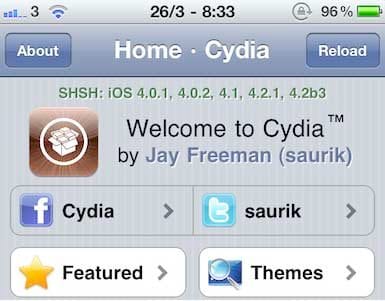 What users will be pleased of is the interface, as some say that it looks much better than before. However, looking good does not make it a decent update, but the new backup option does. Knowing what features will be welcomed by users is a tough call to make, but we are certain that you all have your own most wanted feature — but what is yours?