Samsung has been in the headlines recently for losing a mammoth patent tussle with Apple, which resulted in the Korean giant losing $1.05 billion to their rivals. Regardless of which side you have been on, you are all going to love hearing this latest story which is the new Samsung talking point for the moment.

Forget about the Galaxy Note 2 which has everyone excited right now, as you don’t often see generosity like this. Samsung Canada has donated a customized Samsung Galaxy S3 to one lucky consumer who drew a rather ‘epic’ picture of a dragon along with a personal request to Samsung.

After declaring himself a fan by acquiring a whole set of Samsung electronics goods, consumer Shane decided to try his luck in sending a message to Samsung via Facebook, asking them for a free Galaxy S3 handset in return for his loyalty. Along with the picture was a very cool picture of a dragon and to his surprise, he received a swift response from Samsung.

Samsung initially turned down his request politely, stating that if they gave him a handset, they would go out of business by having to give everyone free handsets. Along with their reply though, they too decided to draw Shane a picture, this time an equally as epic Kangaroo on a unicycle sketch. 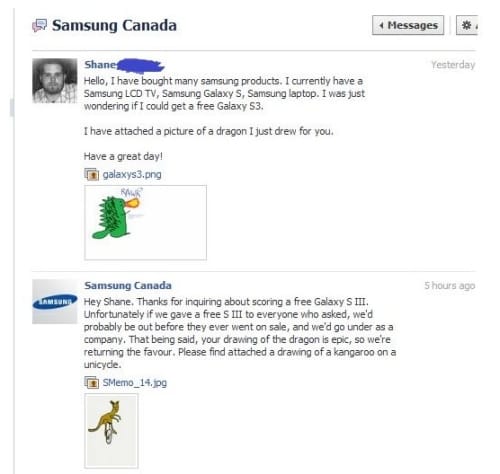 Several months later, Samsung Canada has now sent Shane a truly wonderful gift, in the form of a custom Samsung Galaxy S3 which features the original dragon design that he drew and sent into Samsung. Not only that, but Samsung tinkered with the insides of the device as well, installing a custom dragon launcher as a further gesture of goodwill.

How about this from Samsung folks, considering that they have just lost all that money to Apple as well. It’s also a positive thumbs up to the powers that social media can have, but it could now spark something of a frenzy with everyone drawing pictures for their favorite companies in return for free gifts.

Do you wish you had this custom dragon Galaxy S3? – It’s the only custom built S3 in Canada according to Samsung.