Xbox 360 owners prepare to be excited as the Xbox Live Marketplace has been upgraded to now include a whole range of Batman: Arkham City items to customize your avatar in the coolest way possible.

That’s right; you can now download new costumes from three of the main characters in the game, as well as a whole bunch of other items ranging from Batman’s Batmobile to Two-Face’s coin. Each item will cost a certain amount of Microsoft points however, with the cheapest items setting you back 80 MS points while the most expensive items costs 400 MS points.

If you’re looking to completely transform your avatar into one of the three main characters available from the game, prepare to pay the highest premium as it is the costumes that will cost 400 MS points. The three character costumes available are Batman, Robin and Joker, which can be seen below. If these characters do not take your fancy there are also items that belong to the Riddler available to purchase, including his bowler hat and his cane, which are both listed at 240 MS points each.

If Catwoman is your favorite character then you may be disappointed to know that only her whip is available as an item for your avatar, which will also cost 240 MS points. If you are not prepared to pay so much, items such as the Arkham City themed t-shirts featuring the Robin logo, the Riddle logo and Nightwing design are also available, costing just 80 MS points. Check out the rest of the items on the Xbox Live Marketplace by clicking the link above.

What do you think of these Xbox 360 avatar items? Will you be customizing your avatar with them? 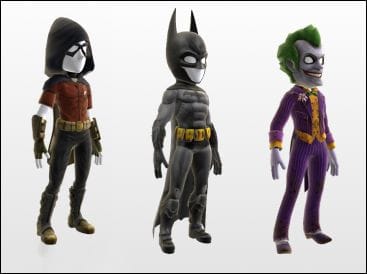