With the release of Crysis 2 just weeks away, we’ve been doing our best to keep you up to date with everything you need to know about the game in the build up to its launch.

We previously brought you news of demo releases both to the Xbox 360 and PC and talk about how little footage there was of the PS3 version. We’ve also compared the game against the most popular FPS out at the moment, COD: Black Ops. Read the article here to see what we thought.

The news we bring you today is from the EA’s third edition of their MyCrysis’ Weapon Focus series. The installment introduces gamers to Feline. Now this weapon may sound like a ‘pussy’ but judging from its specs, I wouldn’t be calling it that. 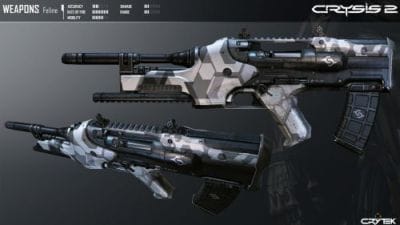 The Feline is a lightweight SMG with a high capacity magazine and can mount numerous attachments including reflex sight and laser pointer. The weapon is ideal for those close encounters you may find yourself involved in. For more details about the Feline click here.

You might also want to check out the Crysis 2 official website for more information about the upcoming FPS game, and the release date when it’s finally announced.

What do you think of the Feline? Let us know your thoughts about Crysis 2 so far?