In early April we confirmed that an update would be coming to the PC version of Crysis 2 to bring DirectX 11 support, well now we have stumbled across some leaked screens which feature DirectX 11 visuals and we have to say that they are particularly impressive.

The screenshots that we found were hosted on PlayerInside.it, we converted the text from this Italian website and it is clear that a little has been lost in translation, however it talks about the fact that it was disappointing that Crytek did not give Crysis 2 DirectX 11 support out-of-the-box and they also spoke about how the original game had set a very high benchmark in terms of visuals for the sequel to follow. Despite the fact that Crysis 2 is currently built on DirectX 9 lots of critics heavily complimented the game’s graphics, so we weren’t quite sure what improvements the DirectX 11 patch would bring.

As you may be aware DirectX 11 is far more advanced than Direct X 9, apparently Crysis 2 takes advantage of parallax occlusion mapping and hardware tessellation to improve things visually, also DX11 is far more capable in terms of motion blur, depth of field, particle effects, shadows and water. We have embedded a screen below to show you what this all results in. 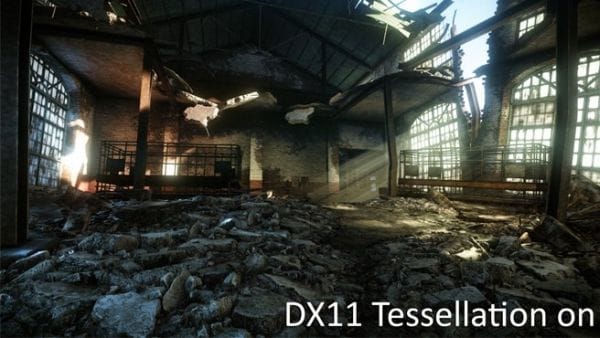 The screen above is certainly one to drawl over and we are particularly impressed by its life-like lighting effects, you can see the other five screenshots via this link, click on the thumbnails for larger versions.

Currently we do not know when the DirectX 11 patch for Crysis 2 will arrive, however the fact that these screens have emerged online suggests that it may not be too far away, we will have to keep you posted as we hear more on the situation.

If you search Crysis 2 DX11 on YouTube you will see lots of impressive in-game footage showing just how much better the game looks with DX11 visuals. We have embedded a video below which compares some Crysis 2 screens with and without DX11 switched on, here you notice that terrain and surfaces look much more detailed when DirectX 11’s tessellation feature is turned on, also at one point in the video we see metallic surfaces showing reflections when SSR is turned on, finally when SSAO is turned on colors look more vibrant and there appears to be much more depth created by shading and lighting.

Will you be taking full advantage of DirectX 11 when Crytek release the patch for Crysis 2?