EA has now unveiled the official FIFA 16 5-Star skillers list in the upcoming game, giving fans a heads-up on which players are going to be able to pull of the best moves in-game.

Right away though, we can see that there has been a big talking point since EA has decided to ignore Brazilian magician Phillipe Coutinho from that list.

We know a lot of you have been asking the question does Coutinho have 5-star skill moves in FIFA 16 and sadly we can now confirm that this won’t be the case.

He’ll only have 4-star skill moves in FIFA 16 and it may be seen as a strange overlook given that EA had already taken the time to give Coutinho a big upgrade from 81 to 84 to his overall stats on FIFA 16 compared to FIFA 15. 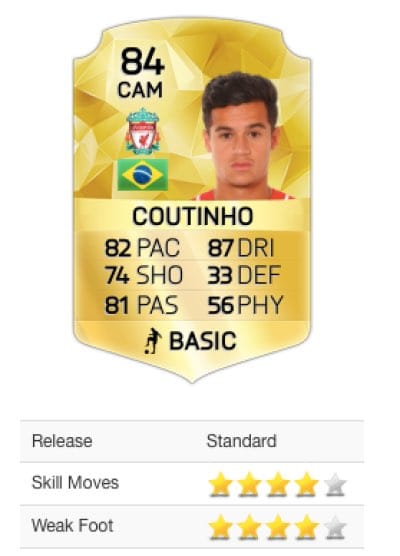 You can view the list of 5-star skill players in FIFA 16, confirming that players such as Ronaldo, Okocha (Xbox only), Pele (Xbox only), Neymar, McGeady, Quaresma and even Bolasie will all have the best moves available to stun players online.

Put it this way, if EA are giving players such as McGeady and Bolasie 5-star skills, then doesn’t Coutinho deserve the opportunity too?

It’s not as if there isn’t enough examples justifying Coutinho’s inclusion as a 5 star skiller in FIFA 16. Take a look at some examples that we have provided and let us know if you agree that Coutinho should have had 5-star skills in FIFA 16.