As expected, EA has now gone live with the FIFA 15 FUT TOTS BPL team. There are some players in there which we knew would be chosen such as Harry Kane, but perhaps some surprise absentees too such as Coutinho who is not on the FUT TOTS lineup.

This may be strange to some, as Liverpool FC star Coutinho was selected on the official PFA team of the year and usually EA makes their picks based on this.

However, not this time. EA has gone with a midfield of Matic, Fabregas, Sanchez and Hazard. Even more surprising is that Jordan Henderson has even been chosen ahead of Coutinho as a substitute TOTS player. 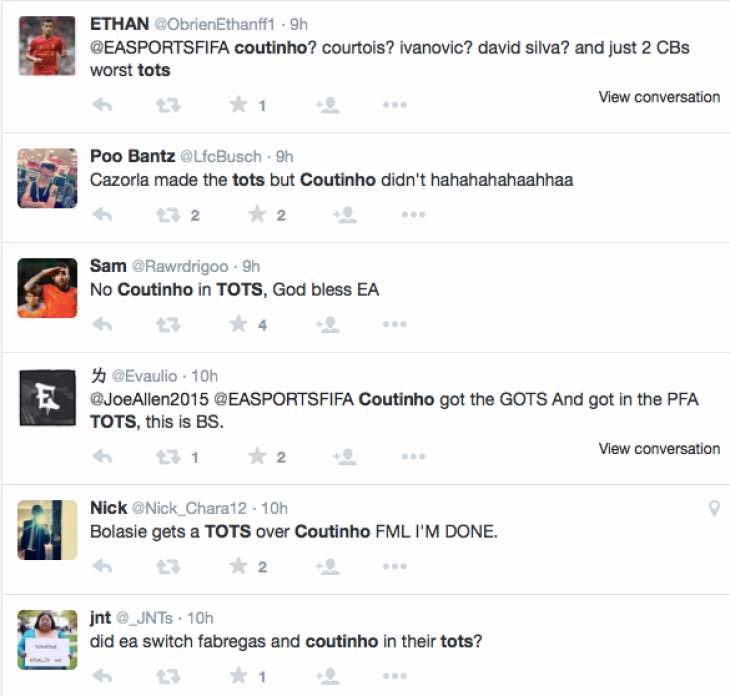 Above is just an example of the reaction that some players have had on Twitter upon hearing the news that Coutinho won’t get a TOTS card for FIFA 15.

He does however have an In form card with an 83 rating though, so it’s not the end of the world. Other surprise inclusions in the BPL lineup include Crystal Palace’s Bolasie, QPR’s Charlie Austin and Southampton’s Ryan Bertrand.

Let us know what you think about the fact that Coutinho is missing. Do you think he should have been there ahead of Fabregas, Cazorla and Bolasie or not?