With FIFA 16 set to launch on September 24 in the UK, fans are now eager to find out the full list of FIFA 16 player rating updates.

EA will definitely be tweaking their stats compared to FIFA 15 and we have a feeling that one player that is certainly up for an upgrade is Liverpool FC magician Philippe Coutinho.

The little Brazilian has been in fine form for club lately and especially in his last game when he scored another stunner with Coutinho goal Vs Stoke the winning one. 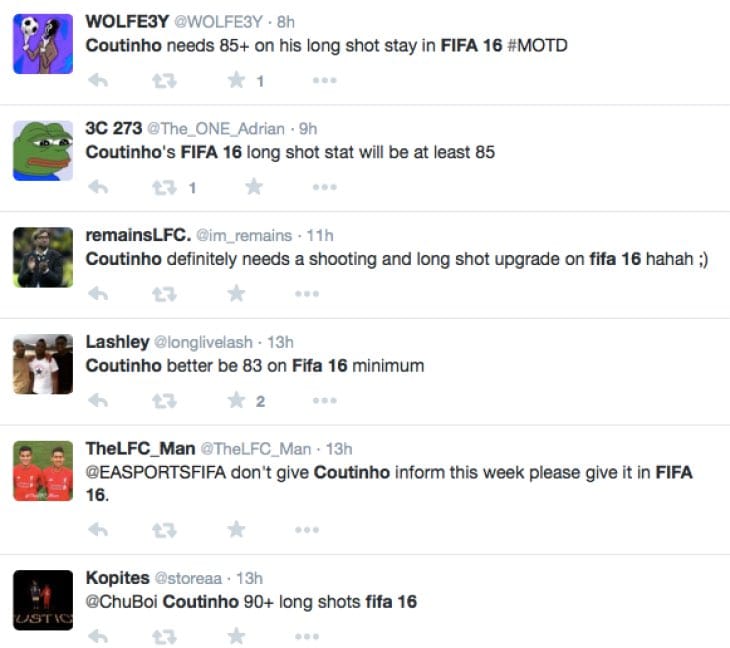 It’s actually the latest in a series of long range efforts from Coutinho and we can see that players are now demanding that EA upgrade Coutinho’s long range shots stat in time for FIFA 16.

At the moment, Coutinho has a 68 stat for long shots. If EA are paying attention and listening to fan feedback, this is almost certainly going to be increased by EA to around 80 for the new game.

68 is very low and if Coutinho keeps scoring these types of goals, there’s no way that EA will keep the stat as it is. We’ve even seen some calls for EA to upgrade Coutinho overall too, from an 81 to an 85.

Time will tell to see if it happens, but it has to be very likely at the moment. Do you agree that Coutinho needs a big upgrade for FIFA 16? Let us know who else you want to see upgraded on FIFA 16.