Xur is almost back in the tower again, one week after selling the Icebreaker again much to everyone’s surprise. Now, we look ahead to the Xur location on February 20 in Destiny with players still praying that the Gjallarhorn is next up.

Just hours ago, we told you about one player using the Gjallarhorn in his inventory to solo Crota’s End on Hard mode – the first player to do it with proof.

That just shows how important Gjallarhorn still is to players and we even heard one player say that he would quit Destiny if Xur offers it – since it would ‘disrupt’ the balance of the game in his opinion. 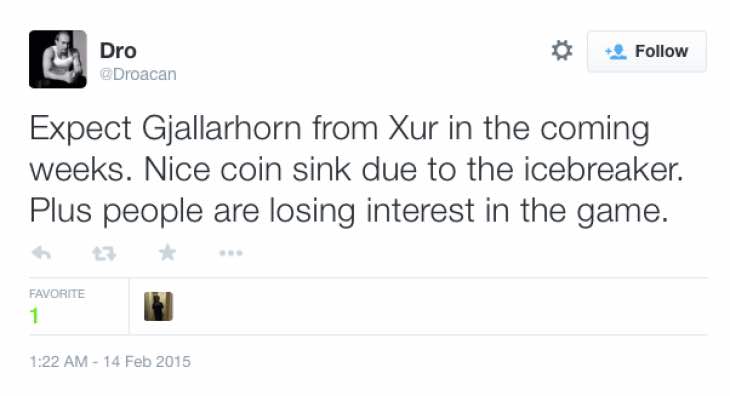 Then again, we’ve had the Ice Breaker twice now in the space of a month so is that game breaking as well in your opinion or not?

As always, Xur’s spawn time in the tower will be 1am Pacific Time, 4am Eastern Time and 9am for players in the UK on February 20.

Last week he was inside the bar, so where is he going to be this week – predictions? Another highly requested exotic is the Suros Regime, but let’s see what Xur and his RNG system can deliver to us this time.

Were you shocked to see Ice breaker back on sale last week? As we countdown to another appearance on Friday, let us know what you are hoping to see the most.

UPDATE: Xur is live and he’s by the Crucible area. You won’t like what he is selling though – full inventory here.