What are you expecting to see this time around from GTA V’s multiplayer mode? We obviously haven’t heard any official details from Rockstar on their highly anticipated multiplayer, but a recent rumor suggests that Grand Theft Auto V is going to have support for a staggering 64 players online.

Naturally, the first conclusion on this is that it has to be fake surely? 64 players on GTA V just sounds insane and highly unlikely given that the first priority for Rockstar will be to ensure that there’s plenty of longevity in the main campaign mode.

Before we discuss, take a look at the apparent ‘leaked’ screenshot that was allegedly posted to Rockstar’s official website before being replaced with an exact image lacking crucial details. These details include a release date before the end of 2012, 1080p support, a PC version, a possible co-op mode and the 64 man online support as mentioned above. 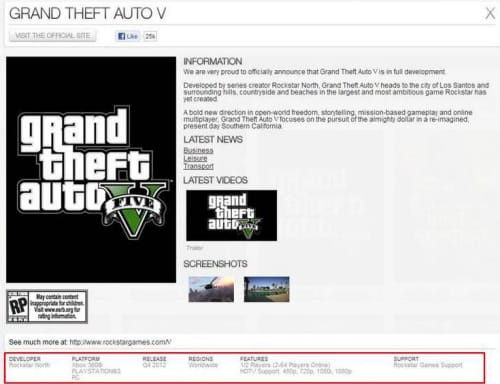 Given that there’s no real substance to the claim, we doubt that this is real – but then again on the other hand, 64 players may not be completely impossible on the PC. Imagine if Rockstar has built the game in a way that it supports double the player count possible on all platforms?

We think the above screenshot is fake, but the idea of 64 players on PC at least is interesting. 64 players online is a lot easier to achieve on PC than console – let us know if you believe this could be a reality or not.