The day has arrived for those FIFA 12 fans in the US as the game finally makes its way onto retailers’ shelves waiting to be snatched off them by those wanting to play it before their friends. Many Xbox 360 gamers will have purchased the game early. Some gamers will still be unsure whether or not they will buy it yet, so to help them decide we have rounded up a few reviews from those who have been lucky enough to get some playing time on it, pre-release.

A few of my colleagues were able to get tickets to the Eurogamer Expo in London last week, which showcased several big name games that are due out for release very soon. FIFA 12 was one of the games available to play, and my colleagues took full advantage. Having experienced the game first hand it was only fair that we let people know what we thought and were able to provide a review defending the games revolutionary changes.

Despite the game only launching in the U.S earlier today, hands-on reviews have already began rolling in from people that have already bought and played it for several hours. The review from GamePro suggests that whether you hate or love soccer ‘FIFA 12 is a masterclass in how to make a brilliant sports game.’ It describes the new features, such as the Precision Dribbling and the Tactical Defending and explains how together they ‘capture the subtleties of the game of football like never before.’ They also highlight that some old FIFA players may struggle to accept the changes. The review lists the cons of the game as being some glitches with the new impact engine, though they are barely noticeable and the pros as everything including gameplay, layout, sound and graphics.

Another review provided by New Game Network is four pages long and gives the game an overall score of 87 out of 100. They claim that EA has made ‘all the right moves’ in terms of changes and say it is a title that everyone ‘should most definitely have a crack at.’ Again the glitches from the gameplay have been listed as a problem, but not enough to ruin the experience. Presentation, soundtrack, graphics and gameplay are also the best parts of the game. Check out the full reviews by clicking the links. Will you be getting FIFA Soccer 12 based on these reviews or were you going to buy it anyway?

For those FIFA 12 fans in the UK, you still have a few days to make your mind up. If you are interested in getting the game but want the best deal, Asda are currently offering the special edition version for £35. Will you be rushing down to stores at midnight to get the game first? 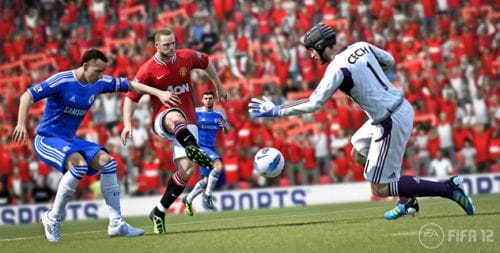