The upcoming Conduit 2 game may have had its release date pushed back recently, but it looks like Nintendo Wii gamers won’t have too much longer to wait. The first-person shooter has now been given a European release date of March 18th and US launch date of March 22nd.

According to Stephany Nunneley over at vg247.com, Sega has also released a brand new weapons trailer and screens for the Conduit 2 title. Those of you who played the original game will remember that in the very last minutes of the game, Secret Agent Michael Ford was faced with a choice. 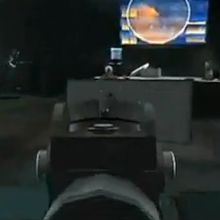 The choice he was faced with was to either die, or follow John Adams through the conduit portal. The story in Conduit 2 is set immediately after the events of The Conduit. You can view the new screenshots via the link here, and watch the new weapons trailer below this post.

This doesn’t appear to be the only Conduit 2 trailer to have surfaced this month either. As Jorge B previously reported over at cubed3.com, a new trailer has emerged that not only shows some of the great environments in Conduit 2, but also gives us a couple of seconds of split-screen multiplayer.