Phone makers are still having a hard time getting Android 4.0 Ice Cream Sandwich on their devices it seems, but this week at MWC 2012 it appears that we have had something of ‘Jelly Bean’ overload in reference to Android 5.0, likely to be the name of Google’s next major mobile operating system.

That news is a pretty big deal in itself, but we have further Jelly Bean clues to share with you as well, as a Google engineer has appeared to confirm that the next version of Android will be available no sooner than November of this year. Considering that Ice Cream Sandwich is still only starting to appear on next Android handsets, it is going to be a somewhat shock if Google already has plans to drop the next major version of Android in 2012.

Take a look at this quote by Hiroshi Lockheimer, Google’s vice president of engineering in a recent interview that he conducted with ComputerWorld:

”In general, the Android release cadence is one major release a year with some maintenance releases that are substantial still.”

He also reiterated that after Android 4 comes Android 5, so that also seems to point towards the idea of the next Android release moving straight up to Android 5.0, and not repeating the tactics of Android Froyo and Gingerbread which was closely linked together at versions 2.2 and 2.3 respectively. This wouldn’t be a new approach for Google, as before Froyo and Gingerbread, we had Cup Cake and Donut which also revealed a version jump from 1.5 straight up to 2.0.

If that wasn’t enough for you to get exciting about, we even have more whispers from LG, who have apparently said that all 2012 smartphone releases will be foolproof so that if and when Google announce Jelly Bean, the hardware featured in their devices will already be compatible with the new version. We like seeing security like this and it will be good news for those of you who are planning to pick up the recently announced Optimus 4X smartphone, which will feature a quad-core Tegra 3 processor. 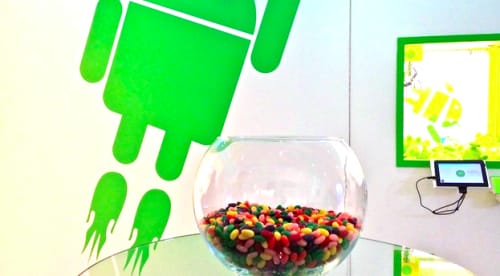 What are your thoughts on a 2012 release for Jelly Bean? Are you worried that your current handset may not be compatible for an upgrade to Jelly Bean?