Samsung was first to share its launch details of the Galaxy S6, followed shortly after by HTC with its One M9. However, Sony had been keeping us waiting with news on the Xperia Z4, until now that is. What we do find intriguing is how Sony has announced the launch of its new flagship handset with little fanfare, unlike those other two rivals.

We do find it very strange that Sony never made a big deal about the Z4 smartphone, although they may presume that its specs will do all the talking rather than them?

However, this may not go the way Sony wants, seeing as though the Z4 looks very similar to the current Z3. Having said that, this is pretty much what HTC has done with the One M9, and so its main differences will be it innards.

Sony Xperia Z4 Vs Samsung Galaxy S6 — Most of you pretty much know that the main rival to the Z4 will be the S6, and so you will wish to know how they compare in terms of their specs. 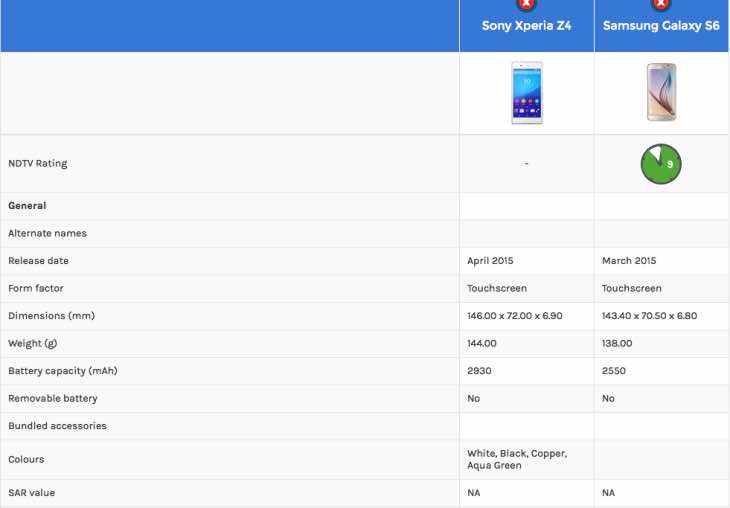 We have come across a comparison chart for you that compares all the main features of these two flagship handsets, and so you can build up a general idea of which would be best for you.

We can clearly see that some of them are comparable, such as the speed of the processors, amount of RAM used, and onboard storage. However, the biggest difference is with the cameras, as the Z4 has 20.7-megapixel compared to 16-megapixel for the Z6, although both have a 5MP front-facing camera.

Having said that, the front-facing camera on the Z4 does sport image-stabilizing, making it ideal for taking perfect selfies.

Do you think Sony has done enough with its new flagship handset to allow it to compete with the likes of the Galaxy S6, the HTC One M9 or even the iPhone 6?