Apple said the last MacBook Pro had game changing graphics and it’s fair to say the next incarnation is likely to bring more changes in this department, which will add more power for both the gamer and business user. Apple fans are certainly not in agreement with the finer details of a 2012 MacBook Pro, and while we all know Apple never comment on rumors some suggestions for the next model are well off the mark.

Dual hard drives are not very Apple — one rumor that spread like wildfire thanks to Reddit included the idea of a dual hard drive setup, which had been suggested by images submitted to the popular social link sharing website. It was pretty obvious this had been fan made thanks to the link stating, “what I think the new MacBook Pro should look like“, and the image (seen below) clearly doesn’t understand Apple. 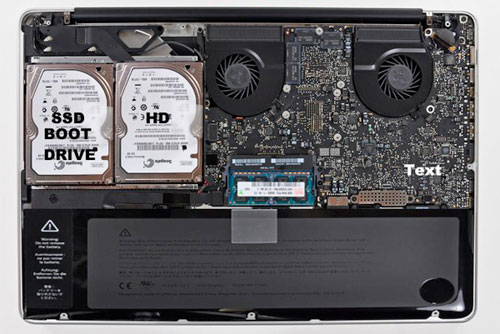 Apple will not incorporate an SSD and normal HDD, and those that think like this are looking too much at the engineering side of Apple’s MacBook Pro’s. This type of design would hurt both the portability gains most of us are looking for and also battery life, which is needed for professionals and gamers alike. There is absolutely no sense in having two hard drives, especially when you consider what Apple historically aims for with their products.

Common sense with the new 2012 MacBook Pro — you can expect Apple to aim for a bigger battery for more juice, and this means getting smart with SSD for extra space and something like 256GB. Apple will not want two hard drives thanks to their push into using cloud storage, and obviously the need for creating more space from thinner laptops. You can also expect a higher efficiency CPU, no optical drive (some people will hate this idea), and a Retina display for something special.

Where this type of MacBook Pro will upset — those laptop users that want 1TB of internal storage will not like 256GB SSDs, and might feel they are being pushed to pay for cloud storage.

What do you consider as common sense for the Apple MacBook Pro in 2012?