C&C: Generals 2 is being developed by BioWare and is headed for a release in 2013, however we do not yet know which platforms this game is coming to. Today we have some details to tell you all about and the first-ever teaser trailer, scroll down to the bottom of this post to watch it.

The video doesn’t give a great deal away, however we do get to see that it will use the Frostbite 2 engine. This should ensure that explosions look realistic just like they do in Battlefield 3 and in terms of visuals we can expect a massive jump when compared to any previous C&C game.

As you would expect Generals 2 is a real-time strategy, you will have to play the part of the Generals after a massive terrorist attack kills everyone in attendance at a peace conference, your job is to end global terrorism once and for all.

Details are still pretty scarce, however we are told that the thrilling single-player campaign lets you experience the story from multiple perspectives as you will be able to take control of three different factions. There will be completely new multiplayer game modes, DLC which will consist of factions, units, maps and more. In terms of gameplay you can expect what we have seen before, building a base, collecting resources, training soldiers and building tanks and aircraft – we can’t wait, check out the screenshot below to get a taster of graphical expectations (click on it for a high-resolution version). 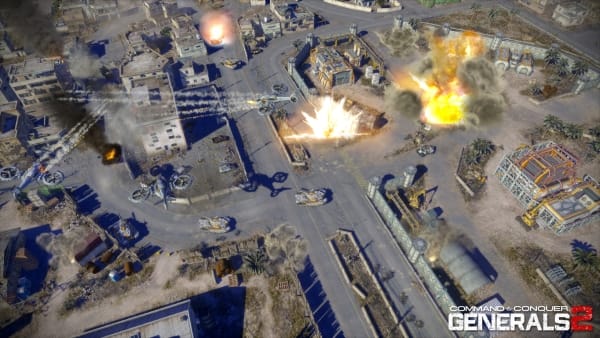 This will be BioWare’s first attempt at a real-time strategy game, therefore it will be interesting to see what they come up with, usually BioWare develop role-playing games, the Mass Effect and Dragon Age franchises have sold extremely well, therefore you can’t blame them for moving out of their comfort zone and trying something new.

Do you think the guys over at BioWare have what it takes to make C&C Generals 2 the best Command & Conquer game to date?