If you are looking to buy the most expensive version of Call of Duty Infinite Warfare in the UK, then you may be unsurprised to hear that GAME once again has an exclusive deal with Activision.

That means the Infinite Warfare Legacy Pro Edition can only be bought at GAME for £110, but the disappointing thing is that there doesn’t appear to be any major bonuses attached to GAME’s exclusive.

If you buy it now, you get 500 COD Points to use in Black Ops 3 and a double-sided poster. As far as we’re aware though, you will still get these bonuses by pre-ordering the standard version of the game. 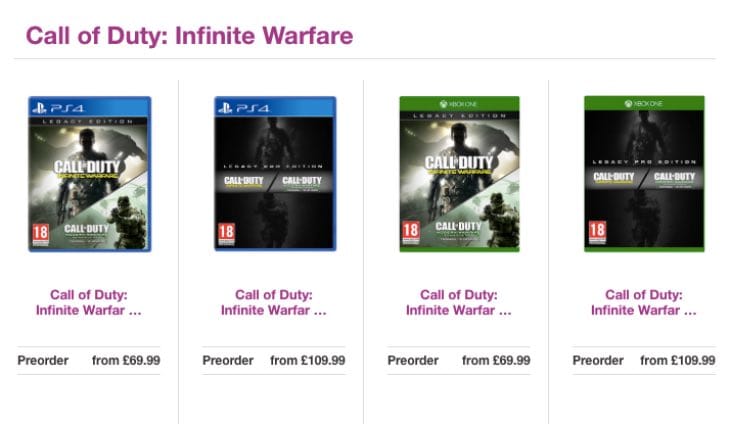 That means for £110 you are just paying for the base package of the game, the Season Pass, Modern Warfare Remastered, a steelbook, soundtrack and other digital items.

Are you surprised that GAME UK is not throwing in any other extra surprises themselves to give you an added incentive to spend over £100 on the new Call of Duty game?

Let us know if you will pre-order anyway and don’t forget to check out the confirmed map list for Modern Warfare Remastered.