We have some more news on Callof Duty Infinite Warfare now for you after the big leak earlier this week. This time, it is an even bigger leak with an HD screenshot once again confirming the name, box art and perhaps more importantly the COD Infinite Warfare price for the standard edition vs the Legacy Edition.

To recap, the Infinite Warfare Legacy Edition is rumored to be the special edition of the game and it is thought to be coming with a copy of Modern Warfare Remastered.

Now thanks to another leak from Imgur, we could have the price for you. Assuming it is legitimate, then the normal version is going to be $60 as expected, but the Legacy Edition could cost you $80. 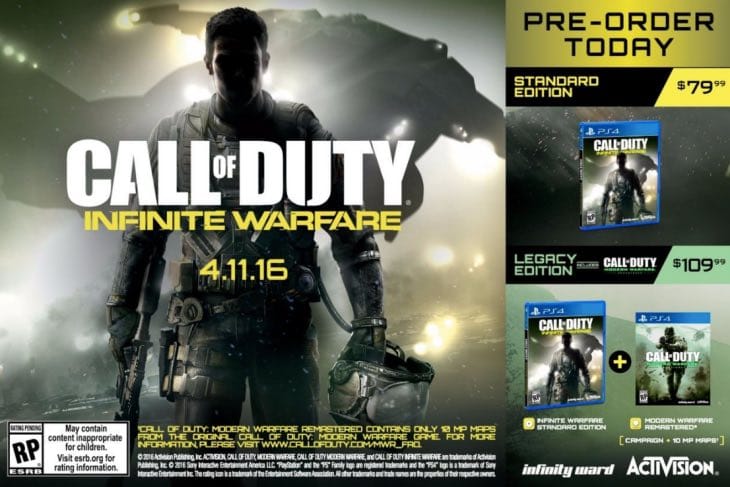 Note that the image above shows prices for the Canadian market, which should clear up some of the confusion upon first viewing.

The other big news if this image leak is real, is that Modern Warfare Remastered will only include 10 maps from the original, not all 20. Given the fact that all leaks so far have shown PS4 copies, it also appears safe to say that any DLC for this game is going to be exclusive to PlayStation once again.

Sony said that Call of Duty is now the home of PlayStation so this makes sense to follow on with the next game after Black Ops 3. One point we do want to raise though, if the Remaster only comes with 10 maps on disc – does it mean that the other 10 will be DLC?

Give us your thoughts on this and whether you are happy to pay $80 for the Legacy Edition or not – assuming this is all true of course.