We have some useful information for those of you with COD Ghosts on Xbox One or Xbox 360 now. The COD Ghosts Makarov Legend DLC has just gone live, another micro-transaction pack which allows you to play as the super villain for the first time.

Makarov is the standout highlight of new COD Ghosts DLC package that has just become available for March 2014. It’s also the most expensive pack too compared to the usual $1.99 packs – but it does contain a few extras.

Aside from the ability to play as Makarov in COD Ghosts multiplayer, you’ll also be given a brand new green weapon camo too, as well as a new reticle to play around with.

The weapon theme is very cool indeed and you’ll be pleased to hear that we already have a COD Ghosts Makarov Legend pack review from respected COD gamer Ali A. 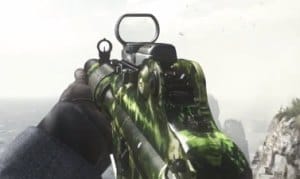 He’s provided the video taking a look at the new weapon and reticle, and how it handles online in a mulitplayer match. You’ll see from our close up picture that it looks really nice, but it will cost you $3.99 if you want to own it.

Enjoy the video below and let us know if you have already bought all of the villain packs. Is the new camo worth the $3.99 in your opinion or not?