A few hours ago I posted an article asking whether Xbox 360 gamers playing Black Ops were receiving the game session no longer available error message when connecting to a multiplayer game with friends, now a Black Ops title update / patch has been rolled out on Xbox Live.

The patch is pretty much identical to the PS3 Black Ops patch we spoke about earlier today, Treyarch‘s community manager JD_2020 recently tweeted this message “Xbox 360 and PS3 #CODBlackOps Updates are LIVE. Be sure to check your platform’s respective Sticky post on the forums: http://2020.vg/ahSVyp”, you can see his tweet here.

It looks as if Treyarch’s main concern was with the matchmaking, host selection and party system problems which people were reporting, that said they have also fixed a few flaws bugs and improved sounds.

You can see the official list of changes that this title update brings below:

· Improved matchmaking to find matches significantly faster
· Improved matchmaking to ensure that players are more effectively matched to games with the best networking conditions
· Improved host selection to ensure that the best host is always selected in the pre-game lobby
· Improved party system to ensure that parties don’t get broken apart
· Disable ability to join Private Match, Combat Training and Theater lobbies when searching for Player Match games
· Server-side and game-side changes to decrease the amount of failed Film uploads
· Weekly and Monthly leaderboards will now track all kills, deaths and assists properly (All Time leaderboards were not affected by this)
· Prevention of Combat Training stats getting crossed with Player Match stats under rare conditions
· Prevention of temporary loss of functionality when a button was being held down at the point of a disconnect
· Additional fine-tuning of audio levels and ranges for footsteps and gunfire
· Additional fine-tuning of audio levels for bomb plants/defuses
· Additional online security enhancements


I have spoken to a friend of mine who was experiencing the same problem as me (see here), he says that he has played Black Ops for an hour so since installing the update without any lag or connection issues, best of all his party of friends could join games without that annoying error message!

We would love your feedback on this matter, therefore turn your Xbox on, load up Black Ops and the title update should download and install, once installed give it a try and come back to let us know whether all problems have been fixed.

Update: I have now installed the 6MB update and played a few games without issues, I have embedded a photo showing the live update at the end of this post.

Has the title update fixed the problems you were experiencing? 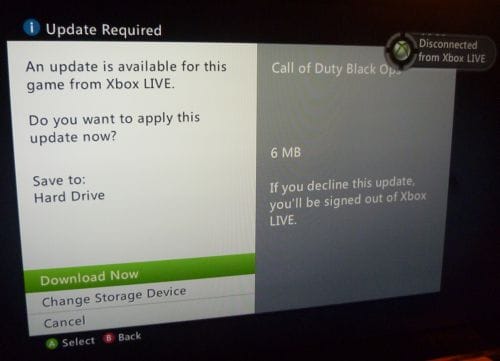