Today we have had some reports of Black Ops problems and disconnects which seem to be affecting both Xbox 360 and PS3 gamers, the good news is that it is not a problem with your setup, in fact Treyarch has been busy carrying out a CoD Black Ops server update.

From what we can see the servers should be back to normal soon, the scheduled maintenance should be finished by the end of the day today (February 22nd, 2011), you can check your console’s Black Ops server status for yourself here (you can choose either Xbox 360, PS3, Wii or PC at the bottom of the page). 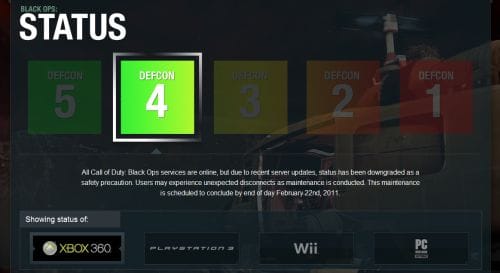 Hopefully the scheduled maintenance will improve things in the long run, perhaps Treyarch wanted to improve things before the First Strike Pack hits the PlayStation Network, let’s face it this will put a lot of extra stress on the game’s servers.

We would love to hear from you if you have noticed poor server stability today and frequent disconnects, let us know in the comment section below.