We have details on what looks to be real information on Treyarch’s new zombie mode for Call of Duty Black Ops. A source has revealed that the new mode won’t be called Nazi Zombies, but simply ‘NOVA’.

According to Evolved Gamer, NOVA will consist of three game modes. The first will be titled ‘Outbreak’, and will be your standard zombie surviving game type, with unlimited waves getting harder as you progress. The second game mode is thought to be called ‘Escape’, as players will need to run through a series of checkpoints before a timer runs out. The last game mode is particularly interesting – it is apparently called ‘Lifeline’, and you’ll go head-to-head against a player for the highest score. Points can be accumulated by killing the most zombies.

A screenshot which you can see below was taken from a beta, according to Evolved Gamer. It shows the lobby screen and a confirmation that players will be able to customize their perks before playing. According to Evolved Gamer, you can choose two perks from a list of four – they include Sleight of Hand, Marathon, Lightweight and ‘Drag-a-Buddy’. 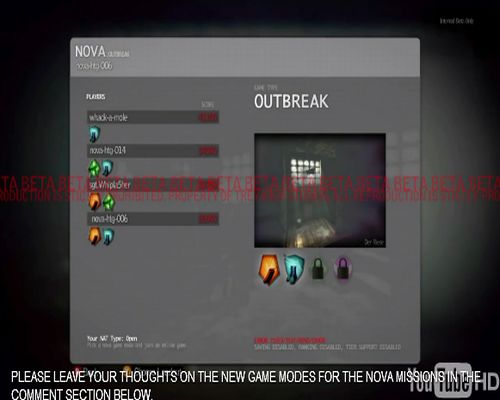 If you pay close attention to the screenshot, you’ll also notice in the bottom right corner that ‘Der Riese’ is the selected map, the last zombie location from World at War.

Too much excitement for one day if you ask me. Don’t forget that this hasn’t been confirmed yet, it could be fake. But it looks promising doesn’t it? A video of the screenshot can be seen below in better quality.

UPDATE: Confirmed to be fake by Treyarch’s Josh Ollin: ”Yes, that is a hoax, none of those screenshots are even remotely accurate…”