It really isn’t long now until Xbox 360 owners will be able to start playing the new Call of Duty: Black Ops maps that are included in the ‘First Strike’ map pack. To celebrate this fact, Activision has decided to release a preview trailer that shows gamers just what to expect.

As Christopher Grant at joystiq.com recently noted, the new preview trailer may show off some of the new ‘First Strike’ multiplayer maps including Kowloon, Stadium, Berlin Wall and Discovery, but there is no sign of zombies or the new zombie map Ascension. 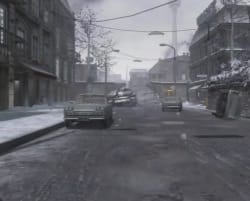 Thanks to a recent article by Brian Crecente over at kotaku.com, we can now bring you a few more details about the upcoming maps. For example, the Discovery map is set in an Antarctic research station, which is evenly divided by a deep chasm that’s connected by a collapsible ice bridge.

Kowloon on the other hand is inspired by the Hong Kong mission that’s found within the game’s single player campaign mode, although it has been rebuilt especially for multiplayer matches. If you enjoy close quarters maps that provide plenty of places to run and hide, then you’ll like the Stadium map.