We have some great news to bring you now, as it has been confirmed that split-screen online multiplayer on one console is an included feature in the upcoming Call of Duty Black Ops title.

As reported from CallofDutyFAQ.com, some new screenshots obtained has confirmed that split-screen multiplayer will be available, although specific details on how it will work haven’t been mentioned yet.

First of all, we have to say well done to Treyarch for adding this in. Split-screen online on one console is a feature which is rarely used on both the Xbox 360 or PS3, so it will be perfect when you have a friend round and he wants to get in on the action at the same time – no more controller switching, yes! 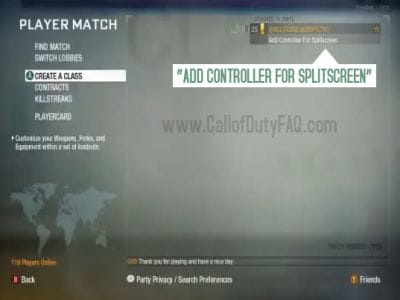 How will the feature work though, as opposed to XP build up and other things such as unlocks? The ideal solution would be to allow the second player to log in with his own PSN ID or GamerTag, so any XP he unlocks would add to the total on his usual console.

However, it might not happen. It seems more easier for Microsoft to implement this on the Xbox 360 than PS3, but Sony has infact used this feature in the past. It is available in LittleBigPlanet 2, Mod Nation Racers and was also available on Resistance 2, although the second player logged in as (John1) for example, and didn’t rank up at all.

Hopefully we will get the full package and the second player will be allowed to log in to their unique account, but we’ll have to wait and see what Treyarch has in store. We can’t be greedy though. Just having the ability to play with a friend online on one console will be enough for most I’m sure.

What are your thoughts on this? If you have any more details on this particular feature, leave us a comment below.