I have been playing Black Ops for roughly an hour tonight and have just received a private message suggesting that Hardcore Headquarters and Hardcore Capture The Flag have both been added, sure enough I turned off my 360, turned it back on and they were both there (you can see an image showing this below) 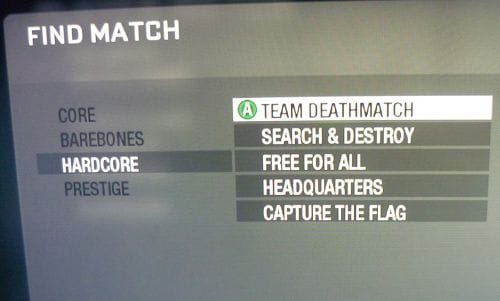 I am just about to have my first game of Hardcore Headquarters, hopefully it will be just as good Modern Warfare 2's version of the game mode, I’m just worried about getting kicked for friendly kills as it is easy to inadvertently kill people with killstreak rewards such as the Napalm Strike.

In my opinion Treyarch is starting to satisfy their customers, a few days ago they released a patch for the PS3 and Xbox 360 versions of the games, which in my opinion greatly improved all of the connection problems, now with these additional game modes I am running out of Black Ops complaints.

As I only own an Xbox 360 I cannot confirm whether the PS3 and PC versions of Black Ops have received these additional game modes, let us know in the comments section below.