Treyarch will be releasing their first batch of DLC content for Call of Duty: Black Ops on Tuesday for the Xbox 360, and to get you in the mood, we have a great video for you to watch, which gives you a good taste of what will be on offer.

As reported from CVG, the video preview comes to you courtesy of Inside Xbox, as they have teamed up with developers Treyarch to preview each map, which offers some previously unseen gameplay footage from the four multiplayer maps – Berlin Wall, Stadium, Discovery and Kowloon.

While the gameplay is great by itself, members of Treyarch’s development team go one step further by talking about each map in detail, giving away hints about what special aspects are contained and the ideal choice of gameplay for each one. For example, it’s clear that Berlin Wall will be the biggest map out of the four First Strike maps, meaning that it will be great for those of you who use the sniper rifle class. 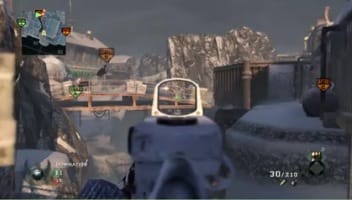 Watch the video below and let us know which map you are most looking forward to playing. Kowloon will feature some rooftop ziplines which you’ll be able to ride on to quickly get from point a to b. It sounds like a great mixup to the frantic action, so we can’t wait to try out that particular aspect of the map.

First Strike is due out on Tuesday for 1200 Microsoft Points.