We have some breaking news to bring you, as it has been reported that a mysterious listing related to Call of Duty: Black Ops has appeared on the official Xbox Live Marketplace website. What could it be?

According to Abstract360, they have identified the ‘First Strike’ listing as a secret internal beta for the upcoming game. The thing is though, if it is internal only, then why has it shown up on the Xbox Live marketplace?

‘First Strike’ doesn’t seem to be related to a multiplayer beta if you ask me, it sounds more like a Co-Op mode more than anything. The listing has since been removed from the website, but you can see what it looked like thanks to the screenshots below. 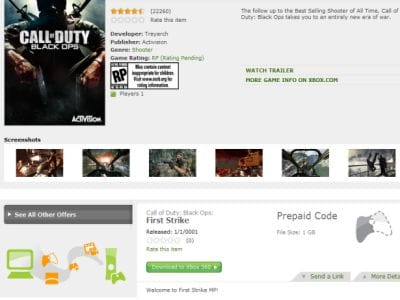 Interestingly, there is also a ‘download to Xbox 360’ menu and also mentions of prepaid codes. This will ring a few bells since this is exactly the same way which Halo Reach was leaked early for thousands of Xbox 360 owners. 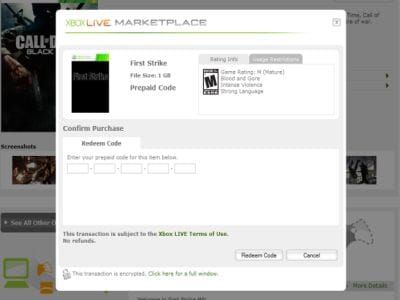 We’ll try and clear up this mystery for you asap. Let us know your ideas on ‘First Strike’.